HAMILTON--Hamilton's West Side Little League All-Stars, runners-up of the Little League World Series, arrived in Hamilton Monday, and were greeted by friends, family, and fans alike. The team and their families gathered at Garfield Middle School for photos and interviews with local media before climbing in their cars and heading over to the West Side Little League complex on Eaton Avenue under a police escort provided by Butler County Sheriff Richard Jones. Fans cheered when the boys arrived at the ballfields, hopped out of their cars, and started signing autographs for younger kids. The City of Hamilton is planning an official welcome home celebration Thursday, beginning with a parade from West Side Little League to Marcum Park, where a short program will be held. The parade gets underway at 7:00pm.

WILLIAMSPORT, PA---Hamilton's West Side Little League All-Stars fell to Michigan 5-2 in the Little League World Series Championship game at Howard J. Lamade Stadium. Hamilton had its chances, stranding ten runners on base, and failing to score after loading the bases three times. Hamilton's lone run came in the 2nd inning when Chase Moak hit a triple, and scored on Cooper Clay's RBI single. Gavin Saylor came off the bench to go 2-for-2 for Hamilton.

WILLIAMSPORT, PA--Hamilton's West Side Little League All-Stars have advanced to the semi finals of the Little League World Series with a 4-2 win over California, the team that put Hamilton in the elimination bracket of the tournament. Chance Retherford's 5th inning triple drove in two runs, putting Hamilton into the lead for good. Noah Davidson drove in Retherford with a base hit to add the insurance run for Hamilton. Davidson also came through on the mound, throwing four innings and giving up one run on six hits and striking out six California batters. Retherford started the game for Hamilton, going two innings, giving up one run on one hit, while striking out four. Retherford also scored on a wild pitch in the 4th inning. Hamilton will meet South Dakota in the Tom Seaver Bracket finals at Lamade Stadium Saturday at 12:30pm on ABC. The winner of that game will play the Hank Aaron Bracket winners (Michigan or Hawaii) Sunday at 3:00pm for the Little League World Series Championship.

WILLIAMSPORT, PA- JJ Vogel threw another brilliant game on the mound as the West Side Little League All-Stars advanced with a 4-3 win over New Hampshire at Volunteer Stadium Wednesday. Vogel went five innings, giving up one hit and striking out 11. JJ gave up a double and a walk before being removed in the 6th inning because he had hit the 85 pitch count limit. Kaleb Harden came in and saw his first pitch leave the yard as New Hampshire's Calen Lucier clobbered a three run homer to make it 4-3. Chance Retherford made a spectacular play in right field for the first out of the inning, and Harden struck out the next batter before Tyler Chauvette reached on a base hit to left field. With the potential tying run on second, and winning run at the plate, Harden struck out the next batter to give Hamilton another landmark win. Harden also had two hits and drove in a run for Hamilton. Chance Retherford also had two hits, including a double, and an RBI single in the top of the 3rd inning. Krew Brown also had two hits and an RBI. West Side will meet California again in an elimination bracket game Thursday 7:00pm at Howard J. Lamade Stadium on ESPN. California fell to South Dakota 1-0 Wednesday. The West Siders are hoping to avenge Sunday's 9-0 loss to the team from L.A. County. The winner of Thursday's game will go on to play South Dakota Saturday in the Tom Seaver Bracket finals. The winner of that game will meet the Hank Aaron Bracket winners for the World Series title Sunday on ABC.

Audio: JJ Vogel says he felt good on the mound

Audio: Ken Coomer talks about Vogel's contributions to the team

Hamilton's West Side Little League All-Stars have gone where no other Hamilton team has gone before...winning two games at the Little League World Series in Williamsport, Pennsylvania. The West Siders saw their bats come alive with eight runs on 8 hits to advance in the Tom Seaver Elimination bracket 8-2 over the Southwest Regional Champion Louisiana. Hamilton took a 3-2 lead into the 4th inning, when JJ Vogel blasted a three run home run to right center field, and Chase Moak doubled in a run. Chance Retherford hit an RBI double in the 2nd inning, and scored twice. Cooper Clay drove in a run in the first inning. West Side pitching was tremendous, with starter Noah Davidson going three innings, giving up two runs on two hits and six strikeouts. Kaleb Harden pitched three scoreless innings, giving up a lone hit, and striking out three batters. West Side will play the winner of the Oregon/New Hampshire game Wednesday 1:00pm at Volunteer Stadium on ESPN. 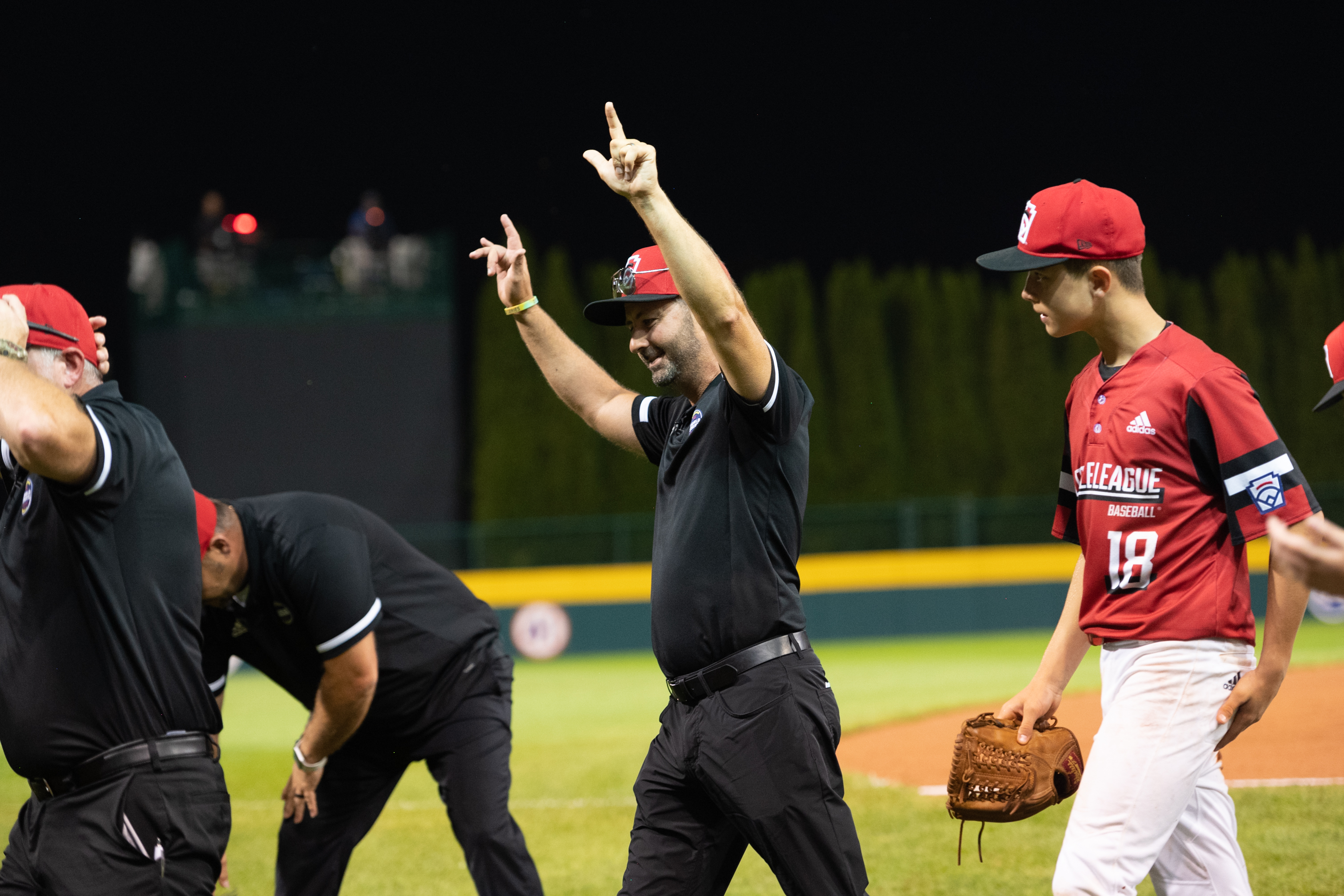 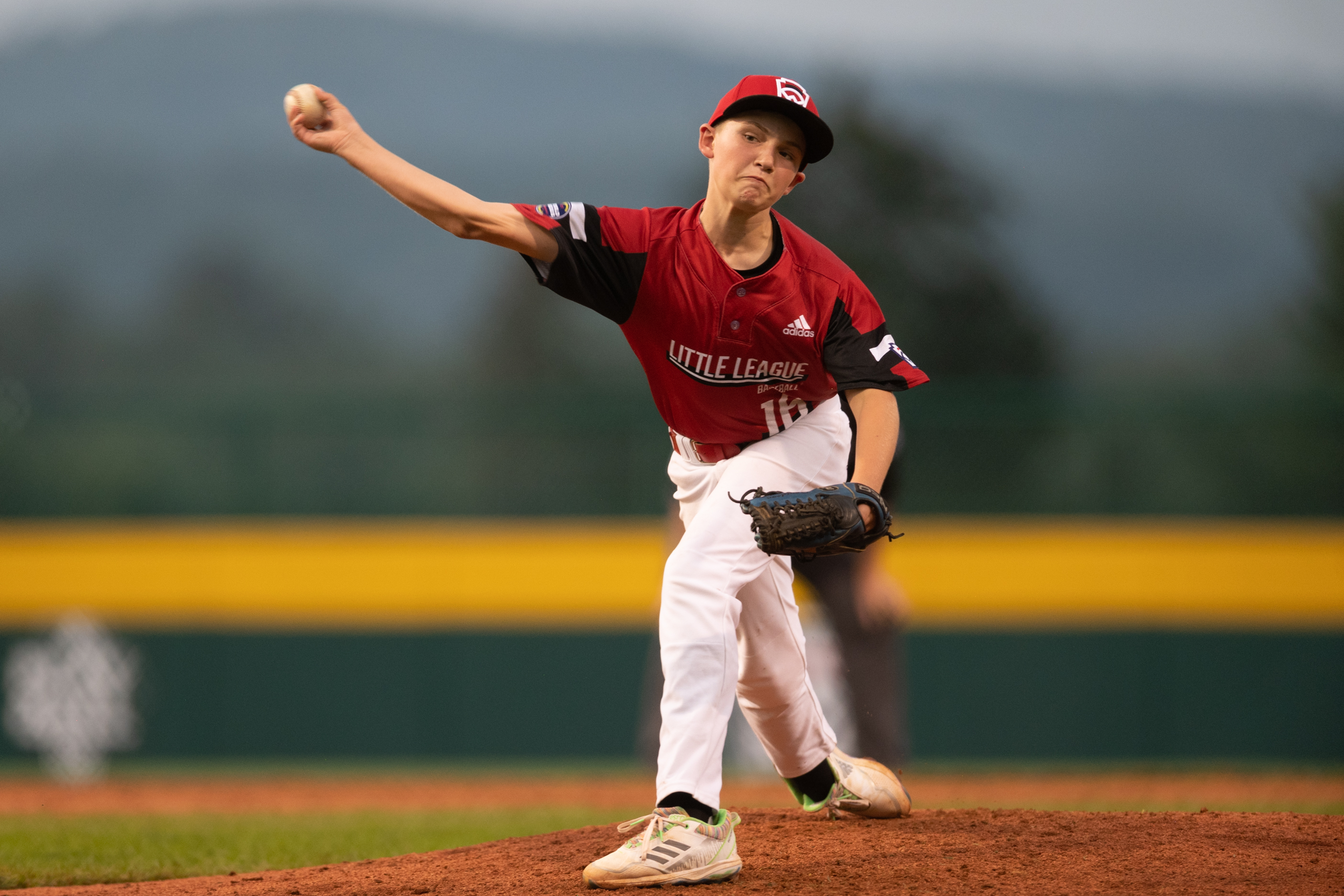 VOLUNTEER STADIUM--The West Side Little League All-Stars were rocked by a hard hitting California squad 9-0 Sunday morning at the Little League World Series in Williamsport. The team from Torrance, California was led by Grant Hays, who came off the bench to hit two towering homers, driving in five runs. Three California pitchers, Xavier Navarro, Isaac Mora, and Brandon Perez combined for a one hit shutout, with Kaleb Harden's first inning leadoff double being the only hit for Hamilton. West Side Coach Ken Coomer says they have been in this position before, losing games in the state and regional tournament, only to rebound through the elimination bracket. West Side will face Louisiana 5pm Monday at Volunteer Stadium. Coomer says Louisiana is a good team, just like all the teams participating in the World Series.

Noah Davidson's misplayed ground ball with the bases loaded in the Bottom of the 8th Inning scored Chase Moak, and the West Side Little League All-Stars walked off with a 1-0 victory over Tennessee in the opening round of the Little League World Series in Williamsport, Pennsylvania. West Side starter JJ Vogel threw 5 and 2/3rds innings, striking out six batters and giving up just one hit on his final pitch. Reliever Cooper Oden was also brilliant, giving up just one hit and striking out two batters in 2 1/3rd innings of relief.

Tennessee pitcher Nolan Brown also shined on the mound, going 7 full innings, giving up just one hit while striking out 4 batters. West Side will play Torrance, California Sunday at 9:00am at Volunteer Stadium.

Hamilton's West Side Little League begins play in the Little League World Series this afternoon against Nolensville, Tennessee. First pitch from Lamade Stadium is 3:00pm on ESPN. COVID has canceled opening ceremonies at Williamsport, PA. The Grand Slam Parade and Player's Picnic were also canceled. If West Side wins, they will play Sunday 9:00am at Volunteer Stadium against the winner of the New Hampshire/California game. If they lose, they will play Saturday 1:00pm at Volunteer Stadium against the losing team from New Hampshire/California.

The West Side Little League All-Stars pulled into Williamsport, Pennsylvania Sunday, hours after rolling away on a bus from Whitestown, Indiana, where they finished as runner-up in the Great Lakes Regional tournament. Coach Kenny Coomer told WMOH that the kids have a busy day Monday, being measured for their uniforms, which will be red with a black trim. The kids will also receive new baseball bats from Easton, Incorporated. On Tuesday, they will have their pictures taken, and record team introductions and outtakes for the ESPN broadcasts. Coomer says each team had to have a COVID test upon arrival at the facility. The team's movements will be restricted, and access to recreational games and activities will be on a team-by-team basis.
Hamilton will play Nolensville, Tennessee at Howard J. Lamade Stadium Thursday at 3:00pm. The game will be carried live on ESPN.

Hamilton's West Side Little League All-Stars are going to the Little League World Series in Williamsport. They beat Illinois Friday 12-0 in a 5 inning run-rule game. JJ Vogel pitched a no-hitter and hit a two run home run to lead Hamilton, who will play Michigan in the Great Lakes Regional Final Saturday in Whitestown, Indiana. Two teams from each region will play in the World Series this year, because international teams are restricted from traveling due to  COVID restrictions. This is the 5th team from Hamilton to make it to the World Series. West Side teams alsomade it to Williamsport in 1991, 1993, 2007, and 2010.

The Butler County General Health District, along with the health departments in Hamilton and Middletown, are recommending residents utilize universal masking in all indoor public spaces. This includes those who have already been vaccinated.
In a joint release, the health districts say the number of new COVID-19 cases have doubled over a two week period, and the positivity rate has jumped drastically in the span of one week. Health officials believe the new Delta variant is responsible for the latest outbreak.

The City of Trenton has a new police chief. Patrick Carr was sworn-in during Thursday night's council meeting. Carr had been serving as Captain for the Ross Township Police Department. He is retired from Forest Park PD, and is a 29 year law enforcement veteran. (Photo: City of Trenton)

West Chester Police are looking for 20 yr old Corey Bates. He is suspected in four separate robberies on July 30th. The robberies at Meijer on Tylersville and Walmart on Cincinnati-Dayton were purse snatchings. The other robberies took place at a Marathon and Speedway on OH-747.

Hamilton Police are investigating the shooting of two men Tuesday at 1030 Ross Avenue. Both victims were described as having critical injuries, according to paramedics at the scene. The men were taken to Kettering Health-Fort Hamilton Hospital, where their condition is unknown. Police were looking for suspects involved in the shooting, but no arrests were reported as of early Wednesday morning.