A Tribute To Vernon R. Baldwin 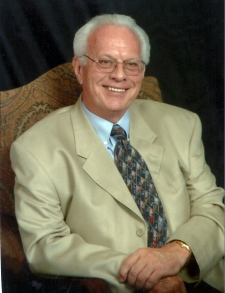 Vernon R. Baldwin was a devoted Christian and deeply loved by his family and friends. Many who knew Vernon attest to the powerful impact he had on their lives and careers. He was born on February 25, 1941, in Jackson County, Kentucky to Walter and Edith (Price) Baldwin. He was educated in the Jackson County School System. On June 1, 1962 he was united in marriage to Marcella (Vaughn) Baldwin in Hamilton, Ohio. Vernon worked on his family farm until leaving Kentucky at age 17. In 1966, he opened Tidy House Furniture in Hamilton, Ohio, later changing the name to Plaza Home Furnishings. He successfully owned and operated his furniture business for 22 years. Vernon was affectionately known by his customers and many friends as "Cousin Vern".

In 1984, Vernon made the transition into the broadcasting industry with the purchase of radio station WCNW 1560 AM in Fairfield, Ohio. In 1990, the FCC granted him the license for WNLT 104.3 FM. It was the first license granted in 22 years, as well as the last available frequency in the Cincinnati area. In gaining this license for WNLT, Vernon achieved his dream of bringing 24-hour Christian music to the Tri-State. In 2002, he realized his goal of attaining well-known Butler County radio station WMOH 1450 AM. He continued his role as president of Baldwin Broadcasting throughout his life. Baldwin Broadcasting is comprised of WNLT 104.3 FM (Cincinnati, Oh), WCNW 1560 AM (Fairfield, Oh), WMOH 1450 AM (Hamilton, Oh), WKLN 102.3 FM (Wilmington, Oh), and WVRB 95.3 FM (Nicholasville/Lexington, Ky).

Vernon was a charter member of the YMCA and served on the executive board for many years. He valued his affiliation with the YMCA and developed many friendships at the Y. Vernon attended Princeton Pike Church of God. He was formerly Chairman of the Board at Hamilton Christian Center, where he attended for many years.