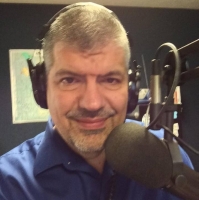 Steve Vaughn is celebrating his 35th year in radio in 2019. He started on August 6, 1984 at WMOH sister station WCNW in Fairfield. In 1986, Steve was hired as an overnight disk jockey for WMOH. Steve's ability to cull and arrange wire copy impressed News Director Johnny Wade, and later that year Steve was hired as a news reporter. Steve left WMOH to become News Director at WPFB radio in 1988. Two years later, WLW Radio hired Steve as their Butler County Bureau Chief. Steve stayed at WLW from 1990-1995, when he was hired back at WMOH as News Director. Steve's 35 years in radio and 26 years at WMOH make him the longest tenured personality in station history. Steve has an Associates Degree from Miami University in Broadcast Journalism.